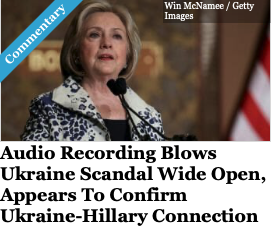 An audio recording obtained by the conservative radio and television network TheBlaze appears to show people in Miami that a top Ukrainian official admitting to trying to damage Donald Trump’s campaign in a bid to help Hillary Clinton.

Politico reported at the time, “In recent days, Manafort had lost the confidence of Jared Kushner, Trump’s son-in-law and one of his closest advisers, and other members of Trump’s family, according to a source close to the campaign.”

“The family was particularly troubled by reports of Manafort’s involvement with Russia and felt he hadn’t been entirely forthright about his activities overseas, the source said,” the news outlet added.

In an audio recording obtained by TheBlaze, Artem Sytnyk, director of the National Anti-Corruption Bureau of Ukraine, who was tried and convicted in Ukraine for interfering in the U.S. presidential election in 2016, can be heard bragging about his work to friends “Kolya” and “Ivan.”

On Friday, conservative commentator Glenn Beck, who founded TheBlaze, shared a translation of the tape.

“Did they, those Russians, help Trump? Your people?” Kolya asks.

“I think they did. Yeah. I helped him, too. Not him, but Hillary. I helped her,” Sytnyk responds.

“I was in charge of the investigation of their ‘black accounting’ records. We made the Manafort’s data available to general public,” Sytnyk later says.

“He was imprisoned,” Sytnyk answers. “Manafort then was the head of the Supreme Headquarter of Trump, right? Then he was dismissed, too, including due to the ‘black accounting.’ After that, he was sentenced to 80 years of term.”

According to Beck, the Democratic National Committee was working with the Ukrainian government through a Democratic operative named Alexandra Chalupa.

Andrii Telizhenko, the Ukrainian embassy political officer stationed at the country’s embassy in the U.S. at the time, stated that the Ukrainians “were coordinating an investigation with the Hillary team on Paul Manafort with Alexandra Chalupa” and that “the embassy worked very closely with” Chalupa.

Beck pointed to an email made public by WikiLeaks between Chalupa and Louise Miranda at the DNC.

“Hey, a lot coming down the pipe. I spoke to a delegation of 68 investigative journalists from Ukraine last night at the Library of Congress, the Open World Society forum. They put me on the program to speak specifically about Paul Manafort,” Chalupa wrote.

“I invited (American journalist) Michael Isikoff, who I’ve been working with for the past few weeks, and connected him to the Ukrainians,” she added.

“More offline tomorrow, since there was a big Trump component you and Lauren need to be aware of that will hit in the next few weeks. Something I’m working on that you should be aware of.”

Check out part of Beck’s program here. The audio recording section starts about the 3:30 mark.

Pelosi has accused Trump of delaying military aid in order to pressure Zelensky to open an investigation on Biden and his son Hunter’s alleged corruption.

Trump has denied wrongdoing and specifically that there was any quid pro quo, while Zelensky has stated he did not feel pressured by the president’s request.

Trump released the Ukrainian aid in mid-September. No investigation had been launched against the Bidens by Ukraine, according to The Associated Press.

So let’s get this straight. Pelosi and her Democratic lawmaker political lynch mob are trying to run Trump out of office because he expressed some interest in learning more about the Bidens potential corruption in Ukraine.

Meanwhile, they find nothing wrong with the DNC actively obtaining assistance from Ukraine during the closing months of the 2016 presidential campaign that resulted in Trump firing his campaign chairman.

There they go again, accusing Trump of doing the very thing they in fact did.